The automatic piano in the hospital lobby plays the old Christmas songs until their effect is like a child practicing a violin for the first time. Companies have Christmas parties that are like class reunions: people either really like them or really dislike them. People spend money they don’t have buying gifts people don’t need or even want. Fruitcake, lights hanging from roofs, Christmas movies, and Bruce Springsteen’s Santa Claus is Coming to Town all make their annual appearance. But despite culture’s efforts, we haven’t quite ruined Christmas. 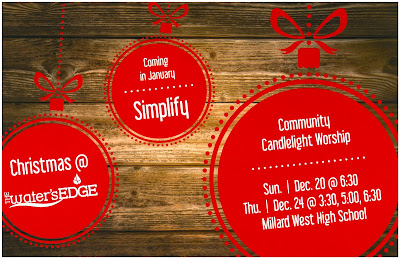 John is the most succinct of the biblical writers when it comes to his account about Christmas. He simply says the Word became flesh. Theologians call it incarnation. Luke gives a few more details. Mary gives birth. It wasn’t easy for her. She and Joseph couldn’t afford the Embassy Suites and the Motel 6 was booked, so they found a barn. The local pharmacy was out of epidurals and the midwife was on vacation for the holidays, so Mary and Joseph were on their own. The birth wasn’t as peaceful as most nativity sets indicate. The blood, the pain, the fears, and the tears—they were all present. They had to be. But out of Mary’s agony came a fragile baby and the world hasn’t been the same since.

A worn out Mary looked into the eyes of the baby. She didn’t notice if they were blue or green or brown. Instead she saw the Light of the World. The wiggly baby she held in her tired arms was the Resurrection and the Life. She fed from her breast the One who one day would defeat and destroy death. She experienced Christmas like nobody else ever has: God coming to be with us.

It was dark outside that night. They couldn’t find a plug-in for the incubator, so Joseph built a fire to keep the baby warm. A warm flicker of light defeated the cold darkness of the world. It was a sign of things to come.

The baby became a boy and the boy became a man. At the end of his life the tears, the fears, the pain, and the blood made their return and the world was about to change again. He rested in a wooden manger as a baby. Decades later he hung on a wooded cross as a man. His agony became our life.

It’s a gift. In Latin it’s gratia. In Greek it’s charis. In English we simply call it grace. We can’t earn it. We don’t deserve it. It is available to all of us no matter how good or how bad we are. Now and in the end, there is nothing quite like the promise of God’s presence: God is with us. That is what Christmas and life is all about.

Join us to celebrate this sacred and holy moment. We will gather at 6:30 on Sunday night, December 20th, and at 3:30, 5:00, and 6:30 on Thursday afternoon and evening, December 24th. We also have Blue Christmas, a service of hope and healing, on Wednesday, December 23rd, at 6:30. I pray this Christmas we all experience God’s presence in our lives.