Jesus was relationally sad. The night before his death, Jesus shared his last meal with his twelve buddies. He looked them in the eye as he broke the bread for the last time. He held back the tears as he blessed the cup. Peter would soon deny him. Not once. But three times. Judas would betray him. Not just any betrayal. A betrayal that would cost Jesus his life. Goodbyes are never easy. Denials and betrayals are as tough as it gets. Heartbroken. 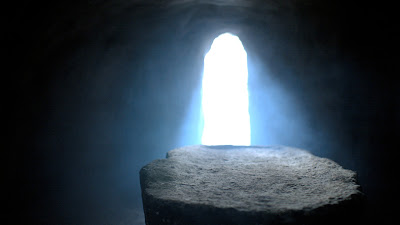 Jesus was emotionally spent. His trial could not have been easy. The soldiers mocked him. They asked if Elijah was coming to save him. They even spit on him. The very people he came to serve and save ridiculed him. Dejected.

Jesus was physically abused. He took a beating. Nails through his hands. A sharp crown of thorns on his head. He was bruised and bloody. He hung on a cross gasping for air. Broken.

And then three days later he rose from the dead. None of the Gospel writers give much detail as to what happened because the details don’t really matter. What matters is that Jesus is alive again.

The betrayal was overcome. The dejection was destroyed. The brokenness was restored. The isolation was overwhelmed. Death was defeated.

We worry about tomorrow. We carry hurts from the past. We wonder if there is more to life. Our busyness consumes us. It seems hopeless that the future will be better than the past. We are sick of being tired. We are slowly dying.

The big stone was rolled away from the tomb. We don’t know if Jesus limped or leaped as he re-entered the world. We only know God raised Jesus from the dead. And we know that God was just getting warmed-up because He has been raising people from the dead ever since.